What is the Difference Between an HDD and an SSD? 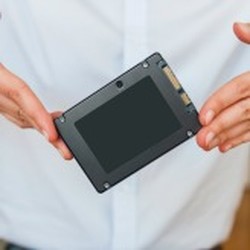 The standard hard disk drive (HDD) has been the predominant storage device for desktop computers and laptops for a long time. However, computers with solid-state drive (SSD) technology are quickly becoming the norm. If you’re looking to upgrade your hardware, you need to know the difference between HDD and SSD.  This blog post is intended to help you to understand the differences between an HDD and an SSD.

What is an HDD?

An HDD is basically a storage device in a computer that consists of metal platters with magnetic coating, a spindle, and various moving parts to process and store data. The common size for laptop hard drives is the 2.5” model, while a larger 3.5” model is usually found in desktop computers.

What is an SSD?

An SSD is another type of data storage that performs the same job as an HDD. But instead of storing data in a magnetic coating on top of platters, an SSD uses flash memory chips and an embedded processor to store, retrieve, and cache data. It is roughly about the same size as a typical HDD and resembles smartphone batteries.

The differences in capabilities between the two storage devices can be grouped into six categories:

Despite the high costs and low capacity, however, SSDs are the clear winner over HDDs in terms of performance. While you’re paying more for less memory with an SSD, you’re investing in a faster and far more durable data storage option in the long run.

We recommend using an SSD as the primary storage for your operating system, applications, and most-used programs. Many laptops and computers also allow you to install additional SSDs to upgrade as required if your storage needs continue to grow.  Implementing HDD as a secondary storage unit is another great idea, especially if you need a place to store documents and pictures because they don’t need to leverage the incredible access times and speeds of an SSD.

Looking to invest in some new hardware for your business? Talk with our experts before you make a decision. We can provide sound advice and help guide you in the right direction.