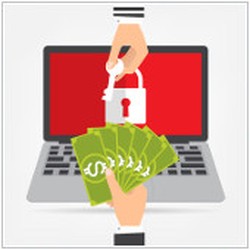 One of the biggest fears that security experts have may be coming true: Self-Replicating Ransomware

Viruses that have the ability to copy and spread themselves to new systems are nothing new, but until now ransomware attacks have been targeted campaigns or relied on the ignorance of users and with that said you should educate you and your staff about this new variant of threat.

The best way to protect your network from a security threat is to understand it, here’s everything you need to know about this latest development.

Ransomware, the Malware that locks up infected systems and demands payment to return access to users, has been steadily increasing its infection rate over the course of this year. Enigma Software reported that, “After staying steady for the last six months of 2015, ransomware detection has begun to climb; February saw a 19 percent increase over January, while March had almost a 10 percent increase over February. Then, in April, infections more than doubled.”

And as if that wasn’t frightening enough, Microsoft announced last week that a recently detected ransomware software was found copying itself onto USB and network drives. The ransomware, titled ZCryptor, disguises itself as either an Adobe Flash installer or a Microsoft Office file to trick users into opening it.

Once opened, it displays a prompt that says “There is no disk in the drive. Please insert a disk into drive D:”. If you see this after opening a suspicious file, it is most likely ZCryptor trying to distract you while it works in the background to add a registry key that buries itself deep in your system and begins to encrypt your files.

Although previous ransomware iterations like Alpha Ransomware had the ability to find and encrypt files on shared network drives, security experts believe this is the first time a ransomware variant has included self-replication via removable drives into its framework.

When it was first detected in May, Microsoft found ZCryptor singling out 88 different file types for encryption. However, later on a security expert analyzed the ransomware and found 121 targeted file types -- inferring that creators of the malware were continuing to develop its source code.

It’s commonplace for ransomware to demand payment to be made in Bitcoins as they’re an almost totally untraceable online currency. ZCryptor is no different, demanding 1.2 Bitcoins (500 USD) unless payment is more than four days after infection -- then it increases to five Bitcoins (2,700 USD).

Still concerned about security at your SMB?

It doesn’t have to be as difficult and draining as you may think. Contact us today for advice on keeping your network protected around the clock.