What is and Why is the New “Black Dot” Emoji Crashing Apple Devices? 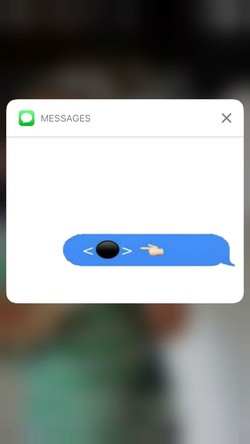 For many, emojis are a fun and efficient and usually harmless way of messaging friends and co-workers, which also makes them a potential Trojan Horse of problems for users. New reports say an encrypted emoji is packed with a series of hidden code can disable and crash the messaging apps on multiple Apple devices, including Macs, iPads, and iPhones. This post will give all the details of the new bug, and ways to prevent it from affecting your devices.

What is the "Black Dot"?

When an iOS user receives an iMessage (this is not an SMS/text) with an emoji of a black dot with a finger pointing at it, the messaging app is forced to lock and possibly crash the entire device. This happens because the emoji is loaded with plenty of invisible Unicode characters, which will overwhelm the CPU and memory of the device.

Even if the user manages to close the app, the bug will remain when the program is opened again, causing everything to crash.

To make matters worse, because iMessage is available on all iOS devices, this bug can crash more than just iPhones. This can include Macs and iPads, or even Apple TVs and Apple Watches. Any iOS device running iOS 11.3 and 11.4 beta is at risk of being affected. Regarding Macs running 10.13.4, the black dot text has been reported to cause the device’s memory usage to fill up with at least 30 gigabytes of swap files.

How do I protect myself from this bug?

Until Apple's development team creates a patch to address the issue, there are available methods of preventing this bug from causing serious damage to your device.

For devices that have Siri installed:

3.       Have Siri keep sending replies until the black dot is off the screen.

4.       Open iMessage, tap Back, and delete the message that has the black dot from the list.

If your iPhone has 3D Touch installed:

3.       When the new message window opens, tap Cancel to see the conversations list.

If your Apple device does not have 3D Touch or Siri installed:

2.       Being careful not to open the message itself, delete the message with the black dot from the conversation list in the former device.

When the final version of iOS 11.4 is released, the problem should be resolved. Until then, stay vigilant for this malicious emoji bug, and use these tips if you need to squash this bug.