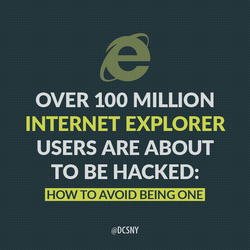 In less than a month millions of internet users will be exposed to security attacks. Microsoft has warned that it will stop supporting all Internet Explorer versions below IE11 after January 12th, 2016. This means you need to take action. Here is what you need to know and what you must do to protect yourself.

According to marketing research firm New Applications, over twenty percent of Internet users are currently on older versions of Microsoft’s web browser. Data from agency US Digital Analytics says this is equivalent to 124 million IE users.

This has catastroPHIc potential for individuals, small and large businesses. Many of you may have auto-update turned on. If you do, then you don’t need to be worried about this January 12th deadline. The rest of you, read on.

The problem is that a large portion of users cannot simply upgrade to the newer version of IE due to their PC running older versions of Windows. For example, Windows XP doesn’t support Internet Explorer 11. If you are on this version of Windows, it is imperative that you upgrade now.

If I don’t upgrade, what happens after January 12th?

Once Microsoft stops backing older versions of IE, it will no longer receive upgrades, security updates or support. If you think this is not a matter to be treated with a sense of urgency, consider this…

Just in the first third of this month Microsoft patched 30 vulnerabilities in IE that could have been exploited. If no longer supported, this becomes an easy target for even the most amateur hackers.

Enterprise, SMB and home users of Internet Explorer can protect themselves from this unnecessary risk by taking a few simple steps. Use this infographic to discover your options in protecting yourself come January 12th. 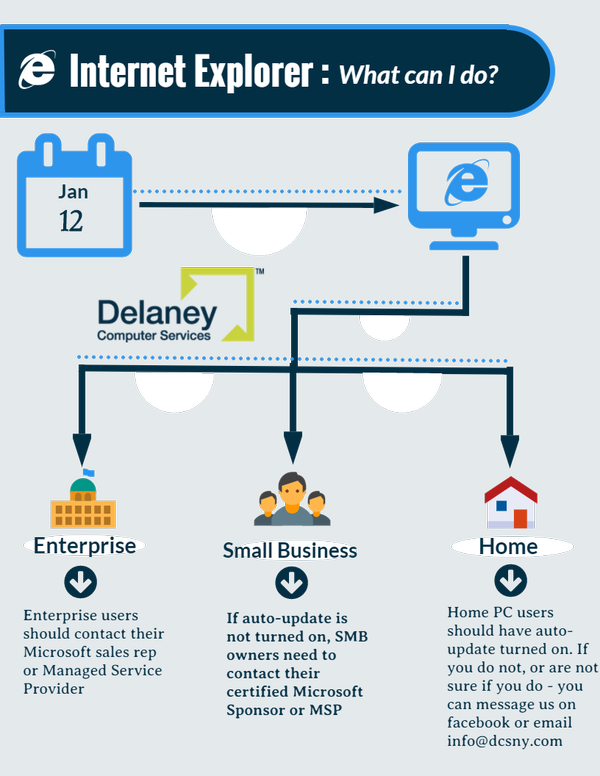 If you are still concerned and need help, I have pasted some screen shots below. For those of you who didn’t have auto-update turned on, follow this step by step visual and it will lead you to updating IE.

Small and Mid-market business owners should heavily consider tightening up security by realigning their current IT solution. A Break/Fix consultant, called only after the problem has occurred, cannot keep you safe. Nor is it in his best interest to keep your business problem-free, as he makes his money off of problems you experience. Your down-server or business interruption is his leverage.

Managed Service Providers are becoming the standard for large and small businesses alike. If you are not certain what exactly an MSP is you can visit http://dcsny.com

How do I update Internet Explorer?

The first visual is from your Windows home screen. Note that I am using Windows 7 in these screen shots. However, the process remains nearly identical for most Windows versions.

If you are on an older version of Windows, it is likely that you've been offered a free upgrade to Windows 10 from Microsoft. I would highly suggest you take that offer, as Windows 10 is a HUGE improvement from Windows 8.  Many businesses, such as ours, are still on Windows 7. But even we will soon be coming around to upgrading.
For those of you who are business owners or executives in mid-sized businesses, you can learn more about using an MSP as your complete IT solution by visiting http://www.dcsny.com/IT-Services-NY-NJ/