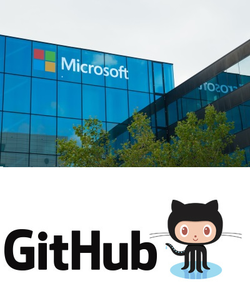 Microsoft Acquires Open Source Code Repository GitHub, What does this mean for the future for Open Source?
Posted June 04, 2018 by Joshua Rosenthal

Huge news in the programming and business world today as Microsoft has announced a $7.5 billion deal to buy the code-sharing service GitHub. GitHub is the world’s largest source code host, with over 28 million users and 85 million code repositories. The deal was organized by Microsoft CEO Satya Nadella and GitHub CEO and co-founder Wanstrath, which also established that former Xamarin CEO Nat Friedman would become the new CEO of GitHub. The acquisition makes a lot of sense for both GitHub and Microsoft.

GitHub, while incredibly popular with most programmers, has been struggling to turn a profit for several years. Bloomberg even reported that the company lost $66 million in the year of 2016. Going under the wing of Microsoft will allow the company to stay financially afloat for many years to come. Microsoft hopes that owning GitHub will make the company much more desirable to programmers across all platforms. The company even claims to already be the world’s most active contributor to GitHub, with over 2 million repository commits from the company.

For now, there are still many questions regarding how GitHub will operate under Microsoft’s ownership. How will GitHub interact with Microsoft’s Azure cloud hosting services? How will they deal with competitors on GitHub such as Apple developers? How much will Microsoft commit to open source projects? Until these questions are answered, it will be very interesting to see the operations of GitHub in the future.