What's the Difference Between Office 2016 and Office 365? 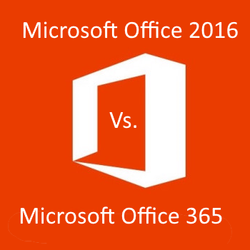 But What's the Difference Between Microsoft Office 2016 and Office 365?

How They’re Paid For

Office 2016 is more of a stand-alone suite, and in most situations is described by Microsoft as a "one-time purchase.”  Typically you pay a single, upfront cost, meaning the entire purchase price must be paid before receiving the license to legally run the software for life. (keep in mind that there are several licensing models and one would want to research)

By contrast, Office 365 is a subscription based service requiring monthly or annual payments. Office 365 allows users to run applications only if payments are made. If you stop, you will have 30 days to continue operating after the previous payment's due date before the license expires.

Another aspect to consider is the service and support offerings. Microsoft provides monthly security updates for Office 2016 applications, and these updates fix non-security bugs. However, you don’t get upgrades for improved features and functionality. If you wish to run the latest edition, you'll have to pay another upfront fee.

Office 365 users, on the other hand, get the same security patches as Office 2016 and also additional feature and functionality upgrades twice a year.

How they Sync with the Cloud

Microsoft announced a major change this April: As of October 13, 2020, Office 2016 applications acquired through an upfront purchase are required to be in the "Mainstream" support period (the first five years of the decade-long commitment) to obtain cloud connectivity. Office 365 subscriptions won’t experience this problem.

In order to achieve measurable results and enjoy business growth, it’s imperative that your business is working with the right Office solution.

Give us a call and let our team of experts assess your needs and determine the better option.