Adobe Flash, once the standard for video and interactive content on the web, has lost the footing it once had and has been blocked by default by two massively popular browsers: Google Chrome and Mozilla Firefox. 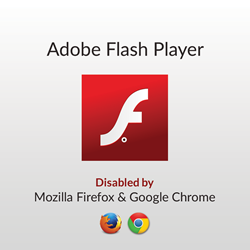 This week, two major tech companies have made the monumental decision to disable Adobe Flash because of security concerns on their browsers. On Monday, July 13th, Mozilla announced they would block all versions of Flash by default, and following this announcement, Google announced on Tuesday that they too would be blocking Flash by default. The companies' reasoning for this is a "zero-day" exploit, an unpatched critical security flaw through which could potentially put any computer running Adobe Flash at risk of falling victim to data theft or other malicious attacks.

While Adobe has patched Flash and met Mozilla and Google's demands for a more secure Flash, Google and Mozilla have re-enabled the new version of Flash through an update of Google Chrome and an update to the Flash Player plugin for Firefox, which must be manually installed directly from Adobe's website.

This restriction of Flash is beneficial to all web users. While Flash was, at one point, the most common way to display non-static content on the internet, HTML5 has been adopted by a majority of major websites and is now supported by all major browsers like Chrome and Firefox. Although Adobe was able to patch this specific exploit, Flash remains a security risk compared to HTML5.

DCS recommends keeping your browser and its plugins up-to-date to continue browsing the internet safely.

Please Note:  If you are already one of DCS'  Managed Services clients these updates will be performed automatically when an automatic update is available to us.

However, if you are not a DCS Managed Services client, then you will either need to update Google Chrome or Flash Player for Firefox to be able to view Flash objects. Without updating your Flash Player plugin, you will not be able to use Flash Player in Mozilla Firefox as all older versions are blocked by Mozilla. If you need Flash to view content on a specific site and you are unable to update your version of Google Chrome, contact your administrator.