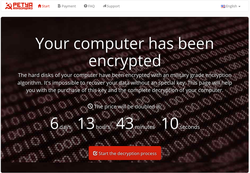 Scarier news from the fun and exciting world of IT Security.  A new form of ransomware. This new bad actor is called, “Petya” and it encrypts the entire hard drive, not just selected files as some of it’s predecessors such as Cryptolocker and Locky and in addition previous ransomware in the Crypto family have just targeted certain types of documents that are most likely to contain data (Word docs, Excel docs, PDFs, etc.) and leaves the operating system intact and bootable. Petya encrypts the entire hard drive, rendering the computer unbootable and a total loss unless the ransom is paid.

Just like its predecessors, once encryption occurs there is no way to recover the files except by restoring from backup or paying the ransom. However, Petya adds the extra little special task of having to rebuild the entire workstation or server.

Since Petya is in most cases an email borne threat that disseminates through an infected email attachments follow these few safety rules:

DCS Clients are protected pretty well from these types of threats as we employ a layered security defense or defense in depth approach but NO SOLUTION IS A %100 MAGIC BULLET.  Think before you click.  If you suspect you have been infected, disconnect your computer from the network and/or shut it down immediately and call us.