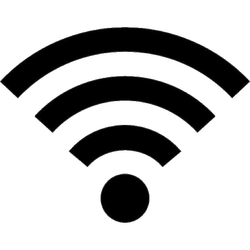 Wi-Fi, also spelled Wifi or WiFi, is a popular technology that allows an electronic device to exchange data or connect to the internet wirelessly using radio waves. The Wi-Fi Alliance defines Wi-Fi as any "wireless local area network (WLAN) products that are based on the Institute of Electrical and Electronics Engineers' (IEEE) 802.11 standards".[1] However, since most modern WLANs are based on these standards, the term "Wi-Fi" is used in general English as a synonym for "WLAN". Only Wi-Fi products that complete Wi-Fi Alliance interoperability certification testing successfully may use the "Wi-Fi CERTIFIED" trademark.

Many devices can use Wi-Fi, e.g. personal computers, video-game consoles, smartphones, some digital cameras, tablet computers and digital audio players. These can connect to a network resource such as the Internet via a wireless network access point. Such an access point (or hotspot) has a range of about 20 meters (65 feet) indoors and a greater range outdoors. Hotspot coverage can comprise an area as small as a single room with walls that block radio waves, or as large as many square miles achieved by using multiple overlapping access points.

Wi-Fi can be less secure than wired connections (such as Ethernet) because an intruder does not need a physical connection. Web pages that use SSL are secure but unencrypted internet access can easily be detected by intruders. Because of this, Wi-Fi has adopted various encryption technologies. The early encryption WEP, proved easy to break. Higher quality protocols (WPA, WPA2) were added later. An optional feature added in 2007, called Wi-Fi Protected Setup (WPS), had a serious flaw that allowed an attacker to recover the router's password.[2]

The Wi-Fi Alliance has since updated its test plan and certification program to ensure all newly certified devices resist attacks.